A discussion paper published last weekend by the Centre for Economic Policy Research in the UK claimed that the tariffs President Donald Trump has imposed on Chinese products are “causing the diversion of $165 billion a year in trade leading to significant costs for companies having to reorganize supply chains.” The paper was authored by Princeton and Federal Reserve economists, and calls this a “cost” on the U.S. economy. But the basis of their analysis is much too narrow. They do not understand that the “diversion” of trade is a sign that the President’s policy is working. We need to reduce the ties between American companies and an increasingly threatening China. And I have no sympathy if those who sought to profit by helping Beijing’s rise (even if “experts” told them it was a good thing for the world) now suffer transition costs. Trump’s actions were prompted by national security concerns.

END_OF_DOCUMENT_TOKEN_TO_BE_REPLACED 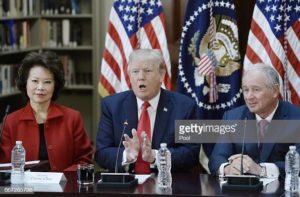 US President Donald Trump flanked by Secretary of Transportation Elaine Chao and Stephen A. Schwarzman, Chairman, CEO and Co-Founder of Blackstone. Mr. Trump speaks during a strategic and policy discussion with CEOs in the State Department Library in the Eisenhower Executive Office Building (EEOB) on April 11, 2017 in Washington, DC. Mr. Schwarzman and the Chao family are influential with Mr. Trump, and have extensive business interests in China. Credit: Olivier Douliery-Pool/Getty Images.

China is powerfully influencing U.S. elections, as President Donald Trump alleged, but one will not necessarily find a Chinese intelligence agent stuffing ballot boxes in the local City Hall, or tampering with a voting booth. Facebook and Twitter claim they found no coordinated messages from the Chinese government. Bloomberg news and three digital security firms all claimed they found no evidence of digital or web-based misinformation campaigns. They apparently don’t count China’s ongoing anti-Trump propaganda, available through state-run media like China Daily and radio stations in the U.S. Nor do they count a new China-linked propaganda film advertised on Facebook, called “Better Angels“.

Plus, China’s immense wealth gives it more sophisticated and effective means to influence the general public, districts that voted for Republicans, the candidates themselves, the businesses that fund candidate elections, the universities and think tanks that hire politicians after they leave office, and the news media that voters will rely upon to choose their representatives on November 6, 2018. That is a far more powerful set of tools than anything the Russians used in 2016.

Vice President Mike Pence had it right when he said, “There can be no doubt: China is meddling in America’s democracy.” He said that Beijing was involved in “an unprecedented effort to influence American public opinion, the 2018 elections, and the environment leading into the 2020 presidential elections.”

Perhaps the most powerful influence that China wields over the U.S. public is the leverage that its $8.59 billion in box office sales provides to its “Propaganda Department” in Hollywood. American movie producers and directors actively self-censor in order not to alienate Chinese censors who could cut millions of dollars of ticket sales by denying access to the Chinese market. This leads Russians or terrorists to be the main villains in most Hollywood films, rather than China. Perhaps in part for this reason, 53% of Americans view China favorably according to a February 2018 poll, despite China’s human rights abuse at home, and ongoing economic and military transgression against the U.S. and our allies. That latent pro-China sentiment will make elections more difficult for Mr. Trump and the Republicans on November 6. This is China’s growing soft power, and is only infrequently commented upon in the media.

China’s sharper power to interfere with elections was demonstrated by the country’s recent attempt to use targeted tariffs to cause economic pain in districts that voted for Trump in 2016. In two rounds of tariffs, including over the summer, China hurt states and congressional districts that voted for Trump and other influential Republicans with $110 billion of targeted tariffs, focusing on commodities like soybeans, sorghum and pork that are overwhelmingly produced in rural pro-Trump districts. China also hit whisky, produced in Kentucky, and cranberries, produced in Wisconsin. Senate Majority leader Mitch McConnell represents Kentucky, and House Speaker Paul Ryan represents Wisconsin. “Mapping the counties that voted for Mr. Trump in 2016 and those affected by China’s tariffs shows the extent to which Trump voters’ jobs rely on the products being targeted,” according to the New York Times. “Beijing hopes it can convince those voters — and their elected representatives — that the president’s trade war could hurt them.” China’s counter-tariffs threaten more than double the jobs in districts Trump won in 2016, compared with those that Clinton won.

But China has many other ways to influence voter opinions in the U.S., and thereby interfere with how voters vote. China also does an end-run around voters by influencing the political choices provided at the voting booth, in that most politicians of both parties are influenced to be soft on China by an environment conditioned by Chinese money and giveaways, including to U.S. students, the media, professors, congressmen, businessmen, and even U.S. military officers.

END_OF_DOCUMENT_TOKEN_TO_BE_REPLACED 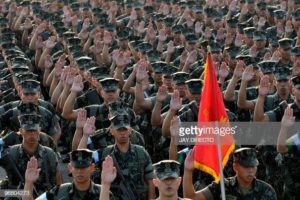